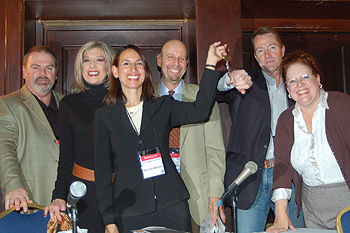 This is the cast of the "trial of the century," sort of, at the New England Crime Bake. The audience-jury voted on the fate of the Lee Child's iconic hero Jack Reacher—as Reacher went on trial for "murder" in the thriller Persuasion. Lee Lofland played the detective, Judge Ken Freeman was the judge, I was the reporter, Michele Martinez the prosecutor, Lee Child testified as Reacher, and Julia Spencer-Fleming was his defense attorney.