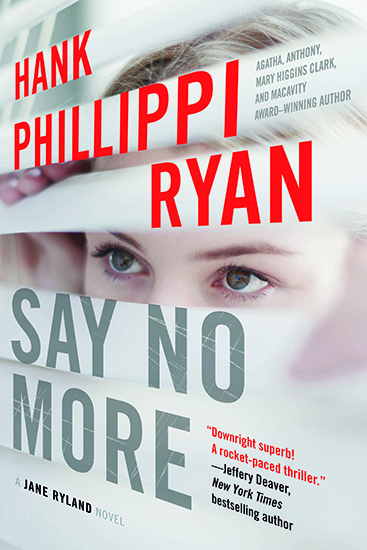 Book 5 of the Jane Ryland Thrillers

Her career is all about the truth—but now, keeping silent may be her last chance to stay alive.

When Boston reporter Jane Ryland reports a hit and run, she soon learns she saw more than a car crash—she witnessed the collapse of an alibi, and now she’s under pressure to tell all to the police. She’s also digging up the inside scoop for an expose of sexual assaults on Boston’s college campuses for the station’s new documentary unit, and is working with a victim to reveal her heartbreaking experience on camera. But, a disturbing anonymous message—SAY NO MORE—has Jane really and truly scared. Who is supposed to keep quiet? And why?

Homicide detective Jake Brogan is on the hunt for the murderer of Avery Morgan, a hot-shot Hollywood screenwriter. Her year as a college guest lecturer just ended at the bottom of her swimming pool in the tight-knit and tight-lipped Boston community called The Reserve. As Jake chips his way through a code of silence as shatterproof as any street gang, he’ll learn that one newcomer to the neighborhood may have a secret of her own.

A young woman faces a life-changing decision—should she go public about her assault? What’s really going on behind closed doors at a prestigious Boston college? And will the killer strike again? Jane and Jake—now semi-secretly engaged and beginning to reveal their relationship to the world—are both on a high-stakes quest for answers as they try to balance the consequences of the truth.

Ryan does it again… A fast-paced, edgy mystery that seems ripped from the headlines.
—Library Journal
… an exceptional multi-faceted procedural.
—RT BookReviews
Downright superb! A rocket-paced thriller.
—Author Jeffery Deaver
Engrossing. The action builds as the tension mounts to a conclusion that thrills and gratifies.
—Publishers Weekly

“Ryan does it again… A fast-paced, edgy mystery that seems ripped from the headlines.”
—Library Journal, Starred Review

“Jane Ryland and Jake Brogan are at it again in award-winning Ryan’s brilliant account of the perils of an inquisitive journalist and police detective. She painstakingly lays the groundwork for an exceptional multifaceted procedural. All of her characters are thoroughly developed as they wend their way to the various subplots. The conclusion is totally unexpected.”
—RTBookReviews

“Say No More is downright superb! A rocket-paced thriller with one of the most compelling casts in recent literary history, this novel takes us deep into the fascinating world where journalism and crime collide. And what a hero we have in Jane Ryland! A word of warning, though: You might get dizzy from the abundant twists and turns.”
—Jeffery Deaver

“One of Ryan’s super powers as a writer is to infuse her books with a real heart-on-the-sleeve quality… While she’s a thriller writer with the complex, intertwining plotting skills of the best of them, her heartfelt way of telling a story and making the reader bond with her characters sets her apart.

As Ryan skillfully weaves together the threads of her complex plot I was captured, as always, by the sheer narrative, but I was also engaged emotionally… It’s a reason to spread the news of this book as far and wide as possible.”
—Robin Agnew, Aunt Agatha’s Bookstore

“Engrossing. The action builds as the tension mounts to a conclusion that thrills and gratifies.”
—Publishers Weekly

“Another compelling entry in a series known for timely social issues and realistic danger.”
—Booklist