Selected as one of Suspense Magazine’s Best Books of 2012

Named a Top Book of 2012 by the Kansas City Star

Selected as one of Suspense Magazine’s Best Books of 2012

Named a Top Book of 2012 by the Kansas City Star 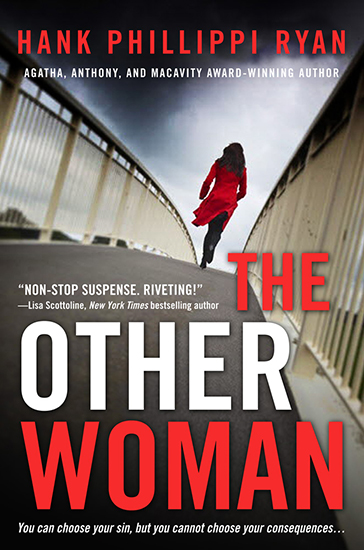 Book 1 of the Jane Ryland Thrillers

Dirty politics, dirty tricks, and a barrage of final twists, The Other Woman is the first in an explosive new series!

Jane Ryland was a rising star in television news… until she refused to reveal a source and lost everything. Now disgraced and on the low rung at a local newspaper, she begins to suspect a Senate candidate’s hiding a secret mistress—and it’s just days before the pivotal election.

Detective Jake Brogan is on the hunt for a killer. When a second woman’s body is discovered like the first—by a bridge with no identification—Jake is plagued by a frenzied media convinced that a Bridge Killer is hunting Boston’s young women.

As the body count rises and election looms closer, Jane and Jake realize their cases are connected… and they may be facing a ruthless killer who will stop at nothing to silence a scandal. As one character warns: “You can choose your sin—but you cannot choose your consequences.”

Seduction, betrayal, and murder—it’ll take a lot more than votes to win this election.

Note: The audiobook is from Macmillan Audio. Not only will you hear the whole story read by Ilyana Kadushin—who also did all the Twilight books!—you’ll hear Lee Child and Hank interviewing each other as bonus material on the audiobook. Click here to hear an excerpt!

Readers who crave mystery and political intrigue will be mesmerized by this first installment of her new series.
—Library Journal, Starred Review
Political skullduggery and murder make a high-octane mix in this perfect thriller for an election season.
—Booklist, Starred Review
[Ryan’s] expertise in the fields of politics and journalism shines in this gripping novel of greed, jealousy, familial angst and political machinations.
—RT BookReviews
Ryan raises the bar sky-high this time—I knew she was good, but I had no idea she was this good.
—Lee Child

“VERDICT: Ryan, the Anthony and Agatha Award-winning author…employs her investigative reporting and political background to craft a dizzying labyrinth of twists, turns, and surprises. Readers who crave mystery and political intrigue will be mesmerized by this first installment of her new series.”
—Library Journal, Starred Review

“Ryan…knows her way around politics at high levels, and she uses that knowledge to fashion a revenge-fueled plot that twists and turns at breakneck speed. Political skullduggery and murder make a high-octane mix in this perfect thriller for an election season.”
—Booklist, Starred Review

“As the intrigue unfolds, tension mounts in this outstanding start to Ryan’s new series. Her expertise in the fields of politics and journalism shines in this gripping novel of greed, jealousy, familial angst and political machinations.”
—RT BookReviews

“Highly entertaining… Ryan combines both a timely tale and a multi-layered plot with gripping suspense. Ryan uses her effortlessly wry touch… The Other Woman is… a well-designed, brisk plot that is high on restraint and without gratuitous violence.”
—Oline Cogdill, Orlando Sun-Sentinel

“A potent combination of thriller and political expose… The Other Woman should keep you happily turning pages…moves the novelist into the same territory occupied by such thriller stars as Sandra Brown and Lisa Scottoline..a wonderful heroine..a terrific new series.”
—Joe Meyers, Hearst Media News Group

“A rocket ride of a thriller! Ryan effortlessly captures the frenetic pace of colliding lives, cutting edge journalism, and killer secrets, as only a true insider would know. Brava!”
—Lisa Gardner

“A non-stop action plot written from the rare perspective of one who knows the news business from the inside out. Ryan grabbed me on page one with her crisp dialogue and fresh, original style. Just when you think you know it all, Ryan surprises with another twist.”
—Sandra Brown

“What a wonderful heroine! Anyone who loves smart, multi-dimensional characters will fall for Jane Ryland, as she’s faced with mounting suspects, mounting tension, mounting victims. She makes me yearn for her company and her next adventure. It’s a thrilling ride and thrilling read.”
—Louise Penny

“The Other Woman is a thriller that twists so fast it’ll leave you gasping… If you think you know where this story’s going, you don’t—but I promise, you won’t want to wait to find out. Hank Phillippi Ryan is a star.”
—Joe Finder

“A master of timing, Hank Phillippi Ryan serves up a powerful fusion of political intrigue and dastardly crime that keeps the reader captivated until the final, explosive ending.”
—Karin Slaughter

“Fast-talking, quick-thinking, schooled in the gritty reality of crime reporting, Jane Ryland works to rehabilitate her professional reputation while she establishes herself in a new job, complete with a rival…and a serious problem on her hands; all of it coming together in a heart-stopping finale. Innocent bystanders beware! This series is off and running.”
—Sue Grafton

“Hank Phillippi Ryan’s smart, fun thriller set in the world of Boston news…will have you flipping the pages faster and faster as you get to the twisty end. This is a story with several threads, and like a Harlan Coben novel, they are all ultimately related, though, also like a Coben novel, you’re never sure quite how until the end of the book. Ryan also shares Coben’s brisk storytelling style as she relates her complicated thriller with an assured voice that won’t leave the reader confused, but rather wanting to turn the pages.”
—Aunt Agatha’s Bookstore

“The Other Woman…is a whirlwind affair of lies, deceit, and treachery. Greed, love, and hate are all painted on an intricate canvas filled with characters who have their own agendas—and human failings. Adding Ryan to my list of ‘don’t miss’ authors.”
—Terry Ambrose, Crime Fiction Examiner

“The Candidate meets Basic Instinct in award-winner Hank Phillippi Ryan’s new high stakes, jet-fueled political thriller. Blending the world’s two oldest obsessions, sex and political intrigue, The Other Woman is a high-octane mix as timely and topical as today’s headlines. Ryan joins the thriller elite and The Other Woman belongs at the top of your reading list!”
—Julia Spencer-Fleming, New York Times bestselling author of One Was A Soldier

“The Other Woman is a tightly plotted whirlwind of a book that mixes sex, politics, a little murder, and a lot of revenge. I thoroughly enjoyed this book…fast-paced, engaging, unpredictable and fun.”
—Deborah Lacy, Criminal Element

“Fabulous! Fabulous! Want to know why everyone is talking about Hank Phillippi Ryan’s sizzling new thriller? Because with its frenetic pace, twisty plot, and superbly realized characters, The Other Woman is the book you need to read next! Don’t miss it!”
—Julie Hyzy

“Ryan skillfully manipulates the story, the twists, and her characters to bring multiple story lines to a successful conclusion. Politics, murder, journalism, crime investigation. There are so many angles to this story. And, the reader really won’t realize how many lines are being manipulated until the very end of this superb crime novel. If you’re looking for an intriguing crime novel, a suspenseful story that will keep you guessing, pick up The Other Woman.”
—Lesa Holstine, Lesa’s Book Critiques

“The Other Woman is riveting, intriguing, and well worth the read. The characters are very well defined, conversations are interesting and intelligent, and the narrative is clean, crisp and very easy to follow. This exciting story has murder, dishonesty, betrayal, a smidgen of romance, and explosive secrets. Lots of layers to this tale, and they all come together and should be devoured like a scrumptious cake.”
—Betty Cox, Fresh Fiction

“A disgraced TV reporter stumbles upon evidence of a politician’s possible career-ending affair and follows it at the risk of her newspaper job and perhaps her life in this tight, suspenseful read with well-drawn characters, a complex plot, and writing that brings the world of Boston politics alive.”
—Kansas City Star