RT BookReviews nominee for Best Suspense Thriller of the Year

RT BookReviews nominee for Best Suspense Thriller of the Year 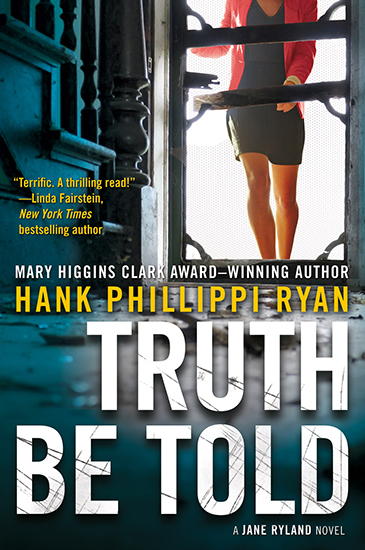 Book 3 of the Jane Ryland Thrillers

Truth Be Told, by Agatha, Anthony, Mary Higgins Clark, Macavity, and Daphne Award-winning author Hank Phillippi Ryan, begins with tragedy: a middle-class family evicted from their suburban home. In digging up the facts on this heartbreaking story—and on other foreclosures—reporter Jane Ryland soon learns the truth behind a big-bucks scheme and the surprising players who will stop at nothing, including murder, to keep their goal a secret. Turns out, there’s more than one way to rob a bank.

Boston police detective Jake Brogan may have a liar on his hands. A man has just confessed to the famous twenty-year-old Lilac Sunday killing, and while Jake’s colleagues take him at his word, Jake is not so sure. But he has personal reasons for hoping they’ve finally solved the cold case.

Financial manipulation, the terror of foreclosures, the power of numbers, the primal need for home and family and love. What happens when what you believe is true turns out to be a lie?

Packs a powerful punch…drop everything and binge-read until the mind-boggling conclusion.
—Library Journal, Starred Review
[Ryan] cleverly ties the plot together, offers surprising but believable plot twists, and skillfully characterizes the supporting case…
—Publishers Weekly
In Ryan’s adroit hands, with her brisk prose, appealing protagonists, and well-limned characters, even foreclosures can be sexy.
—Booklist, Starred Review
Ryland and Brogan are such a cute couple that you wonder how long it’ll be before somebody makes a TV series out of them.
—Kirkus Reviews
Intricate plotting leads the reader though a tale full of curveballs and surprises. Ryan’s gift for storytelling excels…
—RT BookReviews

“Ryan’s smart, well-paced third Jane Ryland novel (after 2013’s The Wrong Girl) takes aim at the housing crisis of recent years…Ryan, a Mary Higgins Clark Award winner, cleverly ties the plot together, offers surprising but believable plot twists, and skillfully characterizes the supporting case, which includes a widower attorney, a bleeding heart banker, and an expectant mother who might be married to a murderer. She also provides just the right amount of romance between Jane and Jake, with a delectable hint that Jake might have some competition.”
—Publishers Weekly

“In the third entry in this award-winning series, investigative reporter Ryan again takes on a social issue—the harm to individuals caused by bank foreclosures—and puts it at the center of a fast-moving procedural with a strong journalistic bent. In Ryan’s adroit hands, with her brisk prose, appealing protagonists, and well-limned characters, even foreclosures can be sexy.”
—Booklist, Starred Review

“The third entry in the “Jane Ryland & Jake Brogan” series packs a powerful punch, and offers a clever mix of mystery, corruption, and romance. Mystery enthusiasts will want to drop everything and binge-read until the mind-boggling conclusion.”
—Library Journal, Starred Review

“Foreclosure fraud entwines with a 20-year-old murder case in the latest knotty, engrossing mystery-thriller by an award-winning Boston journalist… Ryland and Brogan are such a cute couple that you wonder how long it’ll be before somebody makes a TV series out of them.”
—Kirkus Reviews

“This incredible ‘master of plot’ excels with this tale!”
—Suspense Magazine

“Ryan’s latest in her Jane Ryland series is a gem. Deception and greed lead to murder in this excellent novel that is enhanced by Ryan’s background as an investigative reporter.
—RT Book Reviews, Top Pick!

“Truth Be Told is Hank Phillippi Ryan at her best. She uses all her insider skills to craft a terrific story—smart, edgy, full of more twists and turns than you can ever outguess, and a thrilling read to the very last page. If you love Ryan’s books like I do, you’re in for a great ride, and if you’re picking her up for the first time, you’re starting with a winner.”
—Linda Fairstein, New York Times bestselling author

“Hank Phillippi Ryan weaves a taut web of suspense in Truth Be Told. Be prepared to lose sleep once you start reading, because you won’t want to stop. I couldn’t turn the pages fast enough.”
—Meg Gardiner, New York Times bestselling author

“Hank Phillippi Ryan proves herself one of the most adept masters of plot on the planet with her latest, Truth Be Told. Surprises—major surprises—abound, characters live and breath, and everything comes satisfyingly together in the vortex of a perfect storm that pits the duties of the police against the responsibilities of the news media, and makes it all personal. If crime fiction is your beat, this one is a must read.”
—John Lescroart, New York Times bestselling author